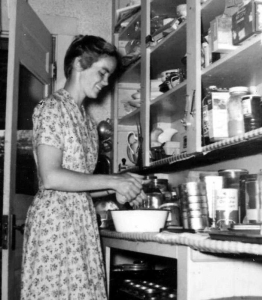 Friends Camp was founded 1953 by the New England Yearly Meeting of Friends. During the first few summers the campers and staff played, worshiped, ate, and slept in what was called the Pond Meeting House. Currently serving as the arts and crafts center, the building was an active Quaker Meeting House from 1807 to 1915. The west side of old Meeting House was divided into three sleeping rooms; the current ceramic room was the first camp kitchen.

Friends Camp grew slowly during the 1950’s, first with a few tents and then with the building of two cabins, the first in 1955 and the second in 1958. For the camp’s first few years the campers and staff used outhouses—Eli for the boys and Sybil for the girls. (Eli and Sybil Jones were Rufus Jones’s Quaker aunt and uncle.) By 1960, The waterfront bathhouse and three additional cabins had been completed. All these youth cabins are in the pine grove. Over the next nine years, the Director’s cabin (Owl), Pooh cabin, and the current dining hall were built. Before the current Director’s cabin was built, the camp directors lived in the entryway room of the Meeting House. The current dining hall and kitchen were designed by Herbert Cates and completed in 1969, when Friends Camp received $23,500 in donations from Quaker families and several Friends Meetings in New England. 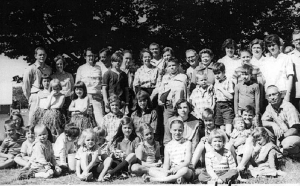 The number of campers and the number of camp buildings started to grow rapidly under the leadership of Susan Morris, who was the Camp Director from 1981 to 2003. During the Morris years, the camp budget grew from about $15,000 to more than $245,000, a number of cabins were built in the 1980’s and 90’s, including Dove, Golubka, Whippoorwill, Mockingbird, and Chickadee. The Aviary Hall, Birdbath, Health Hut, Condor, and the garage were also constructed during Susan’s tenure. The Big Bird dining hall was expanded in 1990’s, and it was expanded again in 2003.

From 2004 to 2016, Nat Shed, took over the leadership of Friends Camp. During these twelve years the camper enrollment was relatively stable, with between 80 and 110 campers attending one of the four camp sessions. Cardinal Hall was purchased in 2007 and the camp’s lake frontage was doubled in 2010. The Health Hut, the kitchen, Old Crow and the camp office have all been renovated. A new two bedroom director’s cabin was built in 2014.  In fall of 2016, Anna Hopkins became the camp director.

This history of Friends Camp is very incomplete. We hope that at some point in time we can find someone to write more complete history of the Pond Meeting House and Friends Camp that will tell stories about the camper’s experiences and about the staff and the volunteers who, over last sixty-four years, have made Friends Camp what is today.  Send your stories and old photos to director@friendscamp.org The Physical and Emotional Safety at Friends Camp
What is Quakerism?